Supreme Chancellor Palpatine, the black-cloaked Emperor has fulfilled his masterful plan and taken control of the entire galaxy, with the equally formidable Dark Lord of the Sith by his side. When Darth Vader reports to the Emperor to discuss their strategy following the Imperial victory on Hoth, he suggests that Luke Skywalker be captured, so that he might be turned to the dark side and join their ranks. The Emperor sees the wisdom of this, and orders that Darth Vader move forward with his plan. 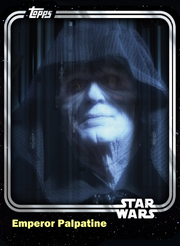 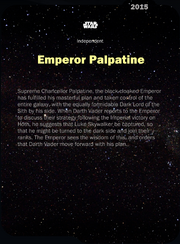 Retrieved from "https://starwarscardtrader.fandom.com/wiki/Emperor_Palpatine_-_Sith_Master_-_Base_Series_1?oldid=33036"
Community content is available under CC-BY-SA unless otherwise noted.