Secretly landing on the forest moon of Endor, a Rebel squadron led by General Han Solo plan to deactivate the shield generator protecting the second Death Star. Once the deflector shield is down, the Alliance Fleet will carry out an assault on the deadly space station. Using camouflage to allow them to blend into Endor's wooded environment, they utilize guerrilla tactics, along with their Ewok allies, to gain the upper hand in battle. By sending a false message from an AT-ST stolen by Chewbacca, Han Solo is able to draw the Imperials from within their bunker, with the Rebel Troopers waiting to capture them. 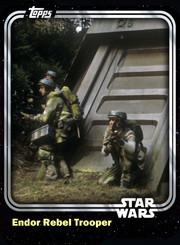 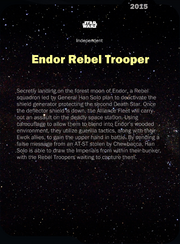 Retrieved from "https://starwarscardtrader.fandom.com/wiki/Endor_Rebel_Trooper_-_Rebel_Alliance_-_Base_Series_1?oldid=34574"
Community content is available under CC-BY-SA unless otherwise noted.