Also referred to as Fixits and frequently paired with 2-1B surgical droids, the FX-series medical assistant droid is part of a ten-model series produced by Medtech Industries. Immobile, cylindrical units with numerous "arms" that assist patients during surgery, they prove invaluable by cutting away dead flesh, holding various items, and sometimes even injecting bacta fluid into subjects. During the Galactic Civil War, FX models are used quite extensively by both the Galactic Empire and forces supporting the Alliance. 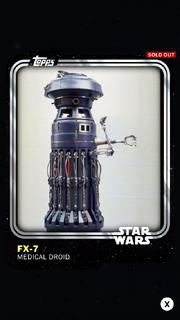 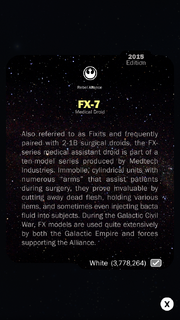 Retrieved from "https://starwarscardtrader.fandom.com/wiki/FX-7_-_Medical_Droid_-_Base_Series_1?oldid=40355"
Community content is available under CC-BY-SA unless otherwise noted.