"Fiery" Figrin D'an is bandleader and organizer of an all-Bith music act known as Figrin D'an and the Modal Nodes. Though D'an himself is overbearing and compulsive, the Modal Nodes maintain a reputable standing in the industry. Eventually the band achieves a reasonable degree of success on the galactic circuit, but the are mostly an Outer Rim entertainment feature, partially, it is theorized by experts, because they incorporated no vocalists in to the act. 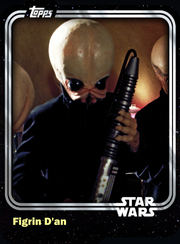 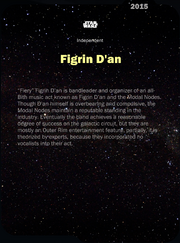 Retrieved from "https://starwarscardtrader.fandom.com/wiki/Figrin_D%27an_-_Modal_Nodes_-_Base_Series_1?oldid=31393"
Community content is available under CC-BY-SA unless otherwise noted.