Garindan, sometimes referred to as "Long Snoot," is considered by many to be the greatest spy in Mos Eisley spaceport. A native Kubaz, his especially sensitive eyes are hidden beneath dark goggles to protect them from the harsh sunlight of planet Tatooine. Just prior to the Battle of Yavin, he is hired by the local Imperial prefect to find two missing Droids, R2-D2 and C-3PO. Garindan successfully tracks them to Docking Bay 94, and while informed Stormtroopers close in, the Droids manage to escape into space anyway. 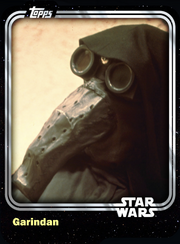 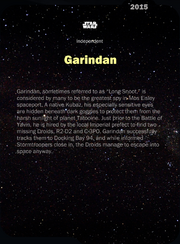 Retrieved from "https://starwarscardtrader.fandom.com/wiki/Garindan_-_Galactic_Empire_-_Base_Series_1?oldid=35909"
Community content is available under CC-BY-SA unless otherwise noted.