Garven "Dave" Dreis spearheads Red Squadron during the Battle of Yavin, taking a fatherly approach to commanding his men as they face an awesome enemy. Posted at the Alliance's base on Dantooine, he is soon transferred to Yavin 4's Great Temple and leads an attack run on Death Star's vulnerable thermal exhaust port. Dreis makes a game attempt to force proton torpedos down the battle station's throat, but fails and perishes, blasted away by a pursuing Darth Vader. Fortunately, Luke Skywalker is able to complete this vital task. 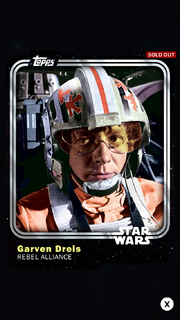 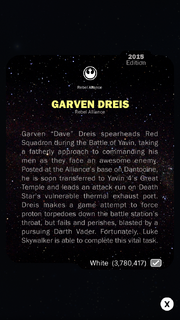 Retrieved from "https://starwarscardtrader.fandom.com/wiki/Garven_Dreis_-_Rebel_Alliance_-_Base_Series_1?oldid=31548"
Community content is available under CC-BY-SA unless otherwise noted.