General Grievous was a brilliant military strategist and a feared Jedi hunter, known for his ruthlessness and hacking cough. His body itself was a weapon, allowing him lightning quick strikes and devastating blows. But he was also quick to run from a fight, a tactic that worked until one final meeting with Obi-Wan Kenobi. 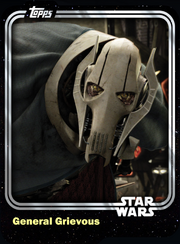 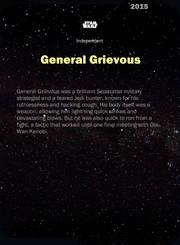 Retrieved from "https://starwarscardtrader.fandom.com/wiki/General_Grievous_-_Separatist_-_Base_Series_1?oldid=36015"
Community content is available under CC-BY-SA unless otherwise noted.