Carlist Rieekan is an Alderaanian strategist who has served the Galactic Republic in his early career. After Palpatine declares himself Emperor, he becomes a leader in the fledgling Rebel Alliance. He serves as commanding officer at the Alliance's Echo Base on Hoth. When the Empire discovers the base, he oversees the ground battle and the evacuation that followed. 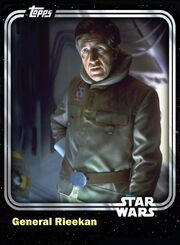 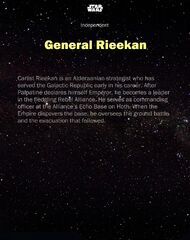 Retrieved from "https://starwarscardtrader.fandom.com/wiki/General_Rieekan_-_Rebel_Alliance_-_Base_Series_1?oldid=32306"
Community content is available under CC-BY-SA unless otherwise noted.