Born into nobility and privilege, General Tagge is chief of military operations aboard the first Death Star, under the command of Grand Moff Tarkin. Unlike some of his colleagues, he has cautious respect for the Rebel Alliance and expresses concern when the plans for the Imperial battle station are stolen. Prior to the Battle of Yavin, Tagge departs the Death Star, surviving that debacle to become a shining star in the profoundly reshuffled Imperial military hierarchy. 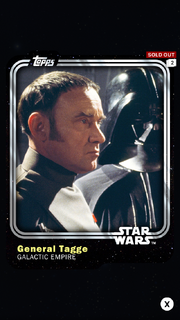 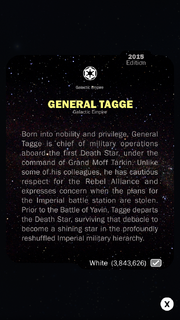 Retrieved from "https://starwarscardtrader.fandom.com/wiki/General_Tagge_-_Galactic_Empire_-_Base_Series_1?oldid=32460"
Community content is available under CC-BY-SA unless otherwise noted.