These winged insectoids are part of a warrior caste on Geonosis. Maturing at an early age, Soldier Drones are ready for battle after six years and are known to attack in large groups, swarming around their enemies. Although they lack any form of armor and are only equipped with pikes and sonic blasters, they fight fearlessly to defend the hives on their homeworld. 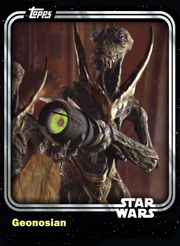 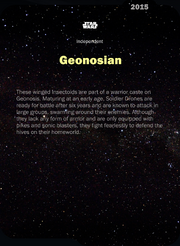 Retrieved from "https://starwarscardtrader.fandom.com/wiki/Geonosian_-_Separatist_-_Base_Series_1?oldid=34579"
Community content is available under CC-BY-SA unless otherwise noted.