After the Galactic Civil War and the fall of his son, Ben, to the dark side, Han Solo returned to what he knew best: smuggling. In his new ship, the Eravana, and with his trusty co-pilot Chewbacca, Solo captured and traded in exotic, and especially dangerous creatures. 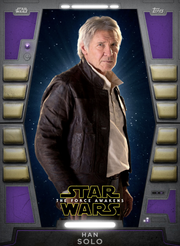 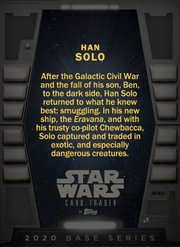 Retrieved from "https://starwarscardtrader.fandom.com/wiki/Han_Solo_(The_Force_Awakens)_-_2020_Base_Series_2?oldid=41660"
Community content is available under CC-BY-SA unless otherwise noted.