Raised on the streets of Corellia, Han grew up orphaned, dreaming of the day he could escape and fly among the stars as a pilot. Ever the charmer, his quick wit and ability to improvise have gotten him out of many dicey situations. 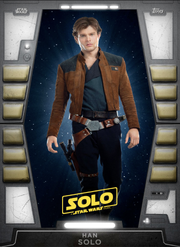 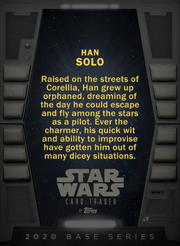 Retrieved from "https://starwarscardtrader.fandom.com/wiki/Han_Solo_-_2020_Base_Series?oldid=40451"
Community content is available under CC-BY-SA unless otherwise noted.