Hailing from Corellia, Han Solo pilots the Millennium Falcon with his Wookiee companion, Chewbacca. To repay Jabba, he agreed to take four passengers on a perilous journey to Alderaan. Ben Kenobi, Luke Skywalker, and the Droids C-3PO and R2-D2. Before Solo knew it he was at the heart of the Rebellion, helping rescue Princess Leia Organa from a prison cell aboard the Imperial Death Star. After claiming he was leaving to pay his debts, Solo returned in the Falcon just in time to provide Skywalker with the cover he needed to send proton torpedoes into the heart of the Death Star, destroying the battle station in the first decisive win for the Rebels. 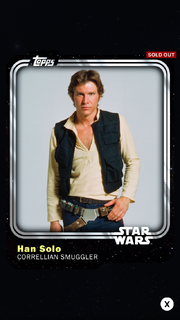 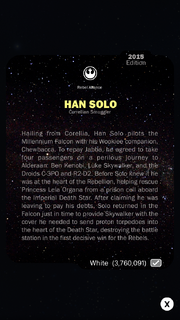 Retrieved from "https://starwarscardtrader.fandom.com/wiki/Han_Solo_-_Corellian_Smuggler_-_Base_Series_1?oldid=32423"
Community content is available under CC-BY-SA unless otherwise noted.