Ignoring the price put on his head by vile gangster Jabba the Hutt, smuggler Han Solo aids Princess Leia and her allies in their ongoing struggle against Imperial aggression. He escorts besieged Leia from Darth Vader's eager clutches when the Rebel base on Hoth is invaded, dodges asteroids and enemy fire power while fearlessly piloting the Millennium Falcon, and faces the harsh judgement of Vader and bounty hunter Boba Fett when he and his friends are captured in the Cloud City of Bespin. 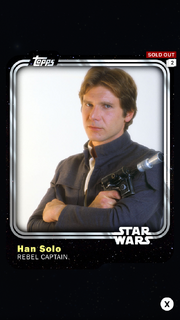 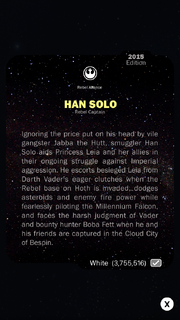 Retrieved from "https://starwarscardtrader.fandom.com/wiki/Han_Solo_-_Rebel_Captain_-_Base_Series_1?oldid=35990"
Community content is available under CC-BY-SA unless otherwise noted.