Derek "Hobbie" Klivian is a longtime officer in Rogue Squadron and a well-respected pilot. He meets and befriends Biggs Darklighter at Prefsbelt Fleet Camp, and is soon instilled with a passion for freedom that leads to impressive victories against the Galactic Empire. Although Darklighter is killed in the Battle of Yavin, his childhood friend, Luke Skywalker, invites Hobbie Klivian to join Rogue Squadron. Klivian serves the unit with distinction, defending the Rebels against Darth Vader's AT-AT attack on the Rebel's Echo Base on Hoth. 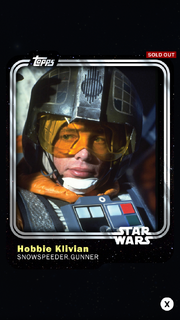 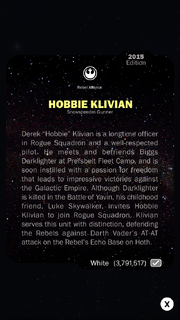 Retrieved from "https://starwarscardtrader.fandom.com/wiki/Hobbie_Klivian_-_Snowspeeder_Gunner_-_Base_Series_1?oldid=33086"
Community content is available under CC-BY-SA unless otherwise noted.