Ruthless ambitious and fully supportive of the Emperor's goals of crushing the rebellion. Imperial Officers are vital to the success of the troops under their command. These high-class soldiers fill many roles in the Galactic Empire's military. Security Officers are trained to identify and neutralize any rebel sympathizers within the Empire's ranks, while the most promising are selected by Grand Moff Tarkin to serve aboard the Death Star. 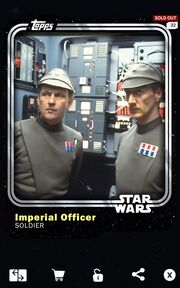 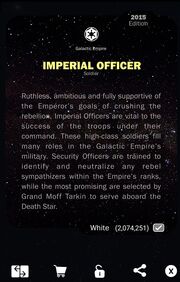 Retrieved from "https://starwarscardtrader.fandom.com/wiki/Imperial_Officer_-_Soldier_-_Base_Series_1?oldid=34581"
Community content is available under CC-BY-SA unless otherwise noted.