In the final years of the Republic, Jango Fett was regarded as the best bounty hunter in the galaxy. A proficient marksman and unarmed combatant, Fett was covered in a sleek armored suit that concealed his scarred face. His combat gear featured an arsenal of weaponry, including retractable wrist blades, a snare, dual blaster pistols and other more exotic tools of the trade. In combat, Jango used his harnessed jetpack to gain the advantage of speed and height over his enemies. The jetpack also carried a nasty surprise – an explosive rocket could be launched from it. For interstellar travel, Jango traveled aboard his well-worn starship, Slave I. 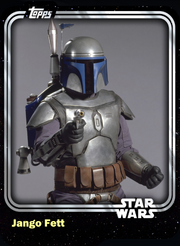 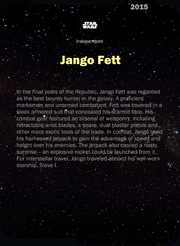 Retrieved from "https://starwarscardtrader.fandom.com/wiki/Jango_Fett_-_Bounty_Hunter_-_Base_Series_1?oldid=31644"
Community content is available under CC-BY-SA unless otherwise noted.