These short, rodent-like creatures are obsessed with collecting outdated and discarded pieces of hardware. Although they can understand the common tongue of the Empire, they also speak an odd variation of their natural language, almost unintelligible to anyone other than Jawas. They use this to their advantage when bargaining with customers. Possessing an inherent knowledge of machinery and electronics, despite no formal training in robotic theory or engine design, allow Jawas to repair faulty droids and vehicles alike – just long enough to make a sale. 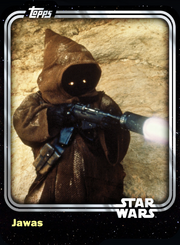 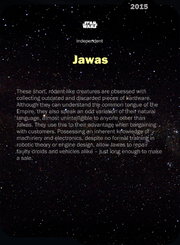 Retrieved from "https://starwarscardtrader.fandom.com/wiki/Jawas_-_Creature_-_Base_Series_1?oldid=39343"
Community content is available under CC-BY-SA unless otherwise noted.