A trader from Bestine IV seeking to strike back at the Empire after he's forced to leave his home world, Jek Porkins trains as a pilot and eventually finds his way into Red Squadron, working alongside flying aces like Biggs Darklighter and Wedge Antilles. Playfully nicknamed "Belly Runner" and "Piggy" because of his rotund physique, Porkins eventually flies as Red Six in the fateful Battle of Yavin, his strafing blasts finding their mark before he is hit by enemy turbolaser fire and killed. 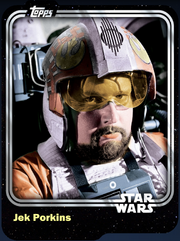 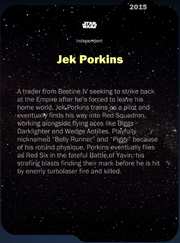 Retrieved from "https://starwarscardtrader.fandom.com/wiki/Jek_Porkins_-_X-Wing_Pilot_-_Base_Series_1?oldid=32166"
Community content is available under CC-BY-SA unless otherwise noted.