A young pilot for the Rebel Alliance, determined John D. Branon joins Luke Skywalker and other Rebel pilots in the raid on the Empire's first Death Star. He and fellow flyer Theron Nett are targeted by TIE starfighters during the early stages of the attack. Branon's T-65 obliterated with him in it. Participation in this great galactic battle forever marks "John D" as a great Rebel hero, his designated callsign Red Four going along with the legend. 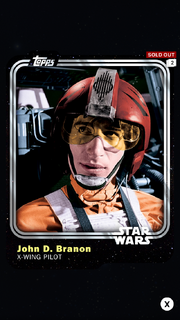 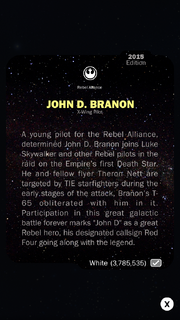 Retrieved from "https://starwarscardtrader.fandom.com/wiki/John_D._Branon_-_X-Wing_Pilot_-_Base_Series_1?oldid=31136"
Community content is available under CC-BY-SA unless otherwise noted.