In spite of a shady past that includes smuggling and unsavoury dealings with criminals, smooth, enterprising Lando Calrissian establishes himself as the successful administrator of Bespin's Cloud City and chief controller of its highly-profitable Tibanna gas mines. Concerned that the Empire will shut down his facility, Lando reluctantly betrays old friend Han Solo, turning both the Captain and Princess Leia over to Darth Vader. Ultimately, Calrissian redeems himself and aids in Leia's daring escape. 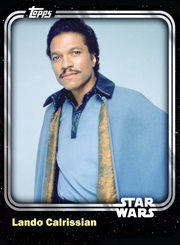 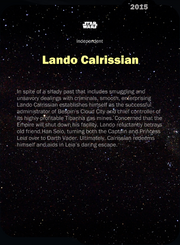 Retrieved from "https://starwarscardtrader.fandom.com/wiki/Lando_Calrissian_-_Bespin_Administrator_-_Base_Series_1?oldid=31212"
Community content is available under CC-BY-SA unless otherwise noted.