Gambler, pirate, scoundrel…Lando went legitimate as administrator of Cloud City, a Tibanna gas mine floating among the clouds of Bespin. He welcomed his old friend Han Solo to Bespin, apparently offering refuge from the Empire's hunters. But Lando couldn't tell Han that Darth Vader had already arrived, demanding Lando help capture the smuggler or face an Imperial takeover. After Vader repeatedly reneged their deal, Lando decided to make amends. He rescued Princess Leia and Chewbacca from the Empire and joined the mission to save Han from Jabba the Hutt. He then led the attack on the second Death Star. 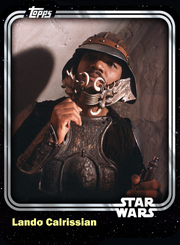 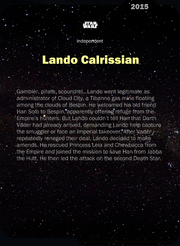 Retrieved from "https://starwarscardtrader.fandom.com/wiki/Lando_Calrissian_-_Rebel_Alliance_-_Base_Series_1?oldid=35881"
Community content is available under CC-BY-SA unless otherwise noted.