As the Neimoidian senator of the Trade Federation, Lott Dod is politically manipulative and exploits conflicts within his system to gain favor from the Senate. When the Free Trade Zones become eligible for taxation by the Republic, Dod invades the planet of Naboo with his droid army, at the behest of Darth Sidious. Despite the failed invasion, Dod continues to represent the Federation in the Senate, determined to protect the interests of his corrupt constituents. 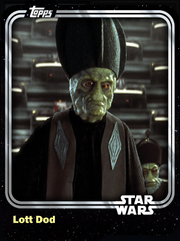 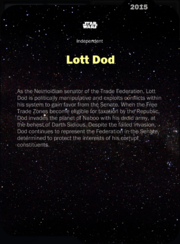 Retrieved from "https://starwarscardtrader.fandom.com/wiki/Lott_Dod_-_Senator_-_Base_Series_1?oldid=34573"
Community content is available under CC-BY-SA unless otherwise noted.