Committed to the cause of galactic freedom, young Luke Skywalker officially joins the Rebellion after his spectacular raid on the Death Star battle station. After the Rebels set up their base on Hoth, he is nearly killed by a ferocious wampa. When the Empire launches its attack, Luke fights heroically against the Empire's dreaded AT-AT Walkers. After meeting and training with Jedi Master Yoda, Skywalker faces Darth Vader on Bespin for a fateful confrontation - and a startling revelation. 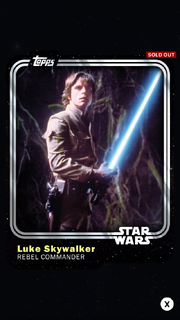 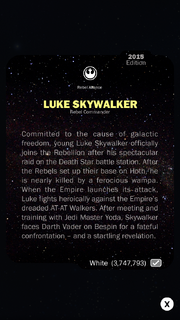 Retrieved from "https://starwarscardtrader.fandom.com/wiki/Luke_Skywalker_-_Rebel_Commander_-_Base_Series_1?oldid=32403"
Community content is available under CC-BY-SA unless otherwise noted.