A leading member of the Jedi Council during the Battle of Naboo up through the Clone Wars. It is Windu himself who leads two hundred Jedi into combat within the Geonsis arena; the ensuing battle of Jedi Knights, monsters and battle droids sets the stage for the arrival of Master Yoda and the Republic's Clone Army. Windu's final mission was an ill-fated attempt to arrest Chancellor Palpatine which would have been successful had it not been for the last-minute intervention of Anakin Skywalker. 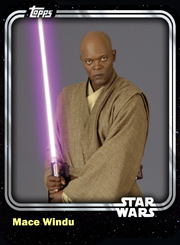 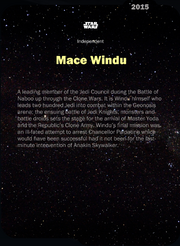 Retrieved from "https://starwarscardtrader.fandom.com/wiki/Mace_Windu_-_Jedi_Master_(AOTC)_-_Base_Series_1?oldid=41029"
Community content is available under CC-BY-SA unless otherwise noted.