Star Wars: Reven of the Sith

A specialized type of Battle Droid commissioned to serve as General Grievous' bodyguard during the Clone War. Equipped with advanced combat learning programs, MagnaGuards are capable of training-in new forms of combat. In order to help protect him for Jedi attacks, Grievous trains his MagnaGuards in the seven forms of lightsaber dueling. During their sparring sessions, he purposely damages them to give them a more menacing appearance. Their electrostaffs are resistant to Lightsabers, making them formidable opponents against the most well-trained Jedi. 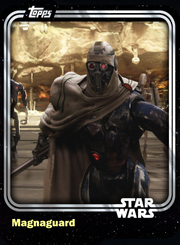 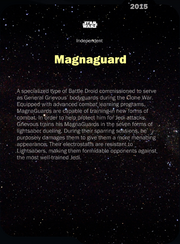 Retrieved from "https://starwarscardtrader.fandom.com/wiki/Magnaguard_-_Separatists_-_Base_Series_1?oldid=34586"
Community content is available under CC-BY-SA unless otherwise noted.