Mas Amedda was the Vice Chair of the Galactic Senate during Chancellor Valorum's term, a position he continued to hold as Chancellor Palpatine transformed the Republic into the Galactic Empire. Amedda's booming voice often called for order when the partisan nature of the Republic's government degenerated into pointless bickering. In an alien gesture of authority, he would often punctuate such calls with a flicker of his long, forked tongue. 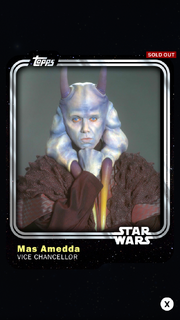 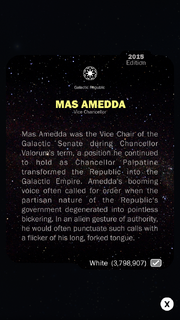 Retrieved from "https://starwarscardtrader.fandom.com/wiki/Mas_Amedda_-_Vice_Chancellor_-_Base_Series_1?oldid=35859"
Community content is available under CC-BY-SA unless otherwise noted.