An Imperial Officer hailing from a wealthy Core World family, Jerjerrod is viewed by superiors as highly efficient if unexceptional, ideal for the Empire's needs. He is assigned to oversee the construction of the second Death Star, which is coming to fruition in the skies over Endor's forest moon. Jerjerrod is frequently asked for progress reports by Lord Darth Vader, Emperor Palpatine's no-nonsense enforcer, and pledges that works efforts will be greatly increased to complete Death Star II as swiftly as possible. 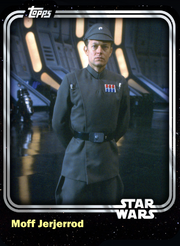 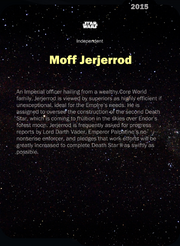 Retrieved from "https://starwarscardtrader.fandom.com/wiki/Moff_Jerjerrod_-_Imperial_Commander_-_Base_Series_1?oldid=31834"
Community content is available under CC-BY-SA unless otherwise noted.