Momaw Nadon is a male Ithorian ("Hammerhead") and rebel sympathizer exiled on Tatooine. His presence there is punishment for revealing the secrets of Ithorian agricultural technology to the Empire, even though doing so saved his homeworld from destruction. On Tatooine he cultivates a hidden garden in the mountains south of Mos Eisley, where he conceals rebel operatives. He is present at the Mos Eisley Cantina on the fateful day Luke Skywalker and Obi-Wan Kenobi first meet Han Solo and Chewbacca. 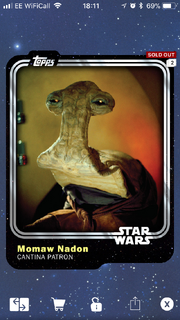 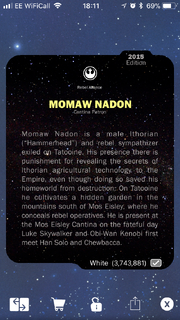 Retrieved from "https://starwarscardtrader.fandom.com/wiki/Momaw_Nadon_-_Cantina_Patron_-_Base_Series_1?oldid=32042"
Community content is available under CC-BY-SA unless otherwise noted.