Mortis Son
THE ONES

The Son is the living personification of the dark side of the Force, demonstrating that power, lust and anger can be corrupting. Along with the Father and the Daughter, he is part of a family of immortal Force-sensitive beings. As the embodiment of the dark side, the Son is manipulative and resentful, believing that the Father, who he reluctantly obeys, is preventing him from reaching his most powerful potential. The Daughter, who is the incarnation of the light side, is naturally at odds with her brother's deceitful behaviour, but despite their eternal rivalry, the Son manages to hold a small affinity for his sister. 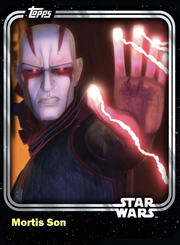 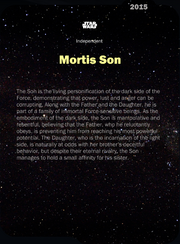 Retrieved from "https://starwarscardtrader.fandom.com/wiki/Mortis_Son_-_The_Ones_-_Base_Series_1?oldid=36072"
Community content is available under CC-BY-SA unless otherwise noted.