Serving as Naboo's militia and primary police force, this division is capable of controlling riots and other small disturbances. Made up of mostly volunteers and part-time guards, they are under the command of Naboo's Security Officer's, although most have never seen proper battle themselves. Many believe that this small and lightly armed force would not be able to withstand a full-scale military assault, like the one that would be carried out by the Trade Federation during the Invasion of Naboo. 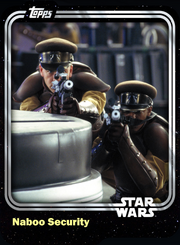 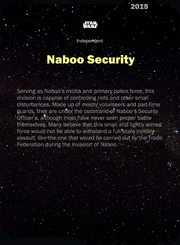 Retrieved from "https://starwarscardtrader.fandom.com/wiki/Naboo_Security_-_Galactic_Republic_-_Base_Series_1?oldid=39204"
Community content is available under CC-BY-SA unless otherwise noted.