The Padawan to famed Jedi Kit Fisto, Nadhar Vebb is a young and brash warrior, who actively sought out conflict. When Fisto is called elsewhere during the Clone Wars, Vebb is left to complete his training on his own, becoming an accomplished Force Healer and tending to the Republic Army's wounded. Angered by the sight of General Grievous' trophies from slain Jedi, the Mon Calamari engaged the cyborg in a duel, ultimately giving his life so that his Master could escape. 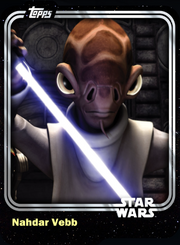 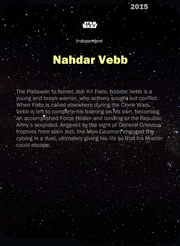 Retrieved from "https://starwarscardtrader.fandom.com/wiki/Nahdar_Vebb_-_Jedi_Padawan_-_Base_Series_1?oldid=39355"
Community content is available under CC-BY-SA unless otherwise noted.