Neimoidian leader of the Trade Federation, profit-obsessed Nute Gunray allies his forces with Darth Sidious in the plot to invade the peaceful planet of Naboo. Ten years later, Gunray has eluded prosecution by the Republic's judicial system and joins with Count Dooku in the creation of the Confederacy of Independent Systems igniting the Clone Wars. When the war takes a drastic turn after Sidious initiates Order 66, Gunray and the rest of the Separatist Council await further instruction on Mustafar. With their usefulness at an end, Sidious dispatches Darth Vader to Mustafar to wipe out Gunray and the rest of the Separatist leaders, thus bringing an end to the Clone Wars. 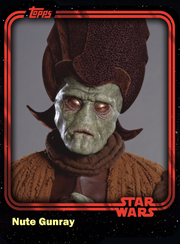 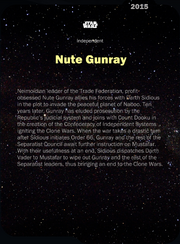 Retrieved from "https://starwarscardtrader.fandom.com/wiki/Nute_Gunray_-_Trade_Federation_Viceroy_(ROTS)_-_Base_Series_1?oldid=31747"
Community content is available under CC-BY-SA unless otherwise noted.