Neimoidians are known for their business skills, but Nute Gunray, Viceroy of the Trade Federation, was more cutthroat than most. It was Gunray who conspired with the Sith Lord Darth Sidious to launch the blockade and subsequent invasion of Naboo. Once the planet was under siege, Gunray attempted to force Queen Amidala to sign a treaty that would legitimize the occupation. Amidala escaped, and returned to infiltrate her own palace and blast through Gunray's protectors. 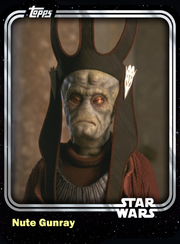 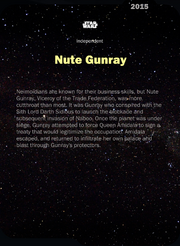 Retrieved from "https://starwarscardtrader.fandom.com/wiki/Nute_Gunray_-_Trade_Federation_Viceroy_(TPM)_-_Base_Series_1?oldid=36023"
Community content is available under CC-BY-SA unless otherwise noted.