Born fourteen years before the Battle of Naboo, Padmé Naberrie is the younger daughter of Ruwee and Jobal Naberrie. A winning student, she volunteers for the Refugee Relief Movement and eventually enters the Legislative Youth Program, pursing a political career in order to assist needy people of various worlds. During the Battle of Theed, Padmé functions as a handmaiden to Queen Amidala, but ultimately reveals her true identity as the Queen herself - to Gungan leader Boss Nass, while securing him as a steadfast military ally. 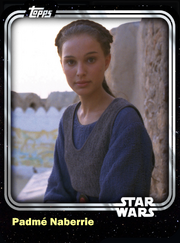 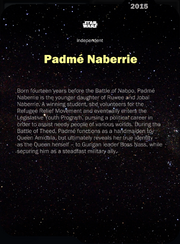 Retrieved from "https://starwarscardtrader.fandom.com/wiki/Padmé_Naberrie_-_Handmaiden_-_Base_Series_1?oldid=34551"
Community content is available under CC-BY-SA unless otherwise noted.