Poggle the Lesser, a leading member of the Separatist movement, is Archduke of Geonosis and controller of the vast droid factories found on his Outer Rim planet. Poggle attains his lofty position with some strategic help from the manipulative Darth Sidious. Ten years later he strikes an equally profitable droid-making deal with Sidious' austere and ambitious apprentice, Count Dooku. Although Separatist forces are defeated during the first Battle of Geonosis, Poggle stayed behind and managed to build a second droid factory which also fell to the Republic. 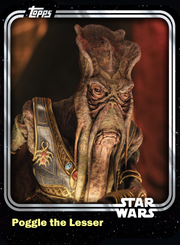 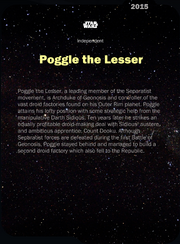 Retrieved from "https://starwarscardtrader.fandom.com/wiki/Poggle_the_Lesser_-_Geonosian_Separatist_-_Base_Series_1?oldid=36065"
Community content is available under CC-BY-SA unless otherwise noted.