An ill-tempered thug, Pondo [sic] Baba, is a space-smuggling [sic] Aqualish pirate partnered with another nefarious character, Doctor Cornelius Evazan. Although they have been successful at their trade, there is no love lost here; Baba even considers turning Evazan in for a reward, before he realizes their ongoing partnership would be more profitable. Unfortunately for both, an apparently drunk Ponda Baba instigates a brawl at Chalmun's Cantina in Mos Eisley, losing an arm in the ensuing melee. 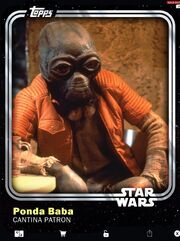 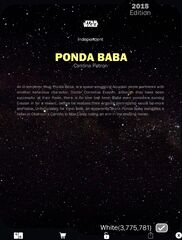 Retrieved from "https://starwarscardtrader.fandom.com/wiki/Ponda_Baba_-_Cantina_Patron_-_Base_Series_1?oldid=40316"
Community content is available under CC-BY-SA unless otherwise noted.