A gifted statesman with fighting skills to match, Pre Vizsla governs the Mandalorian moon of Concordia. He leads the search to uncover the Death Watch, a terrorist sect determined to restore the Mandalorian warrior culture back to full strength. Although he was a close ally of Satine Kryze, he was deceiving the Duchess, secretly leading the terrorists. He believes in the old ways of the 'one ruler' a position he claims as his own and demonstrates his brutality on those who oppose him by challenging them to combat. 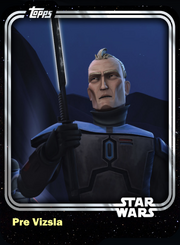 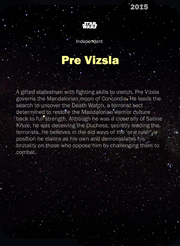 Retrieved from "https://starwarscardtrader.fandom.com/wiki/Pre_Vizsla_-_Death_Watch_Leader_-_Base_Series_1?oldid=36083"
Community content is available under CC-BY-SA unless otherwise noted.