Princess Leia was more than mere royalty - her fearless belief in a galaxy free from the tyranny of the Empire made her one of the Rebellion's greatest leaders. Her fight continued when a new threat, the First Order, emerged from the Outer Reaches… 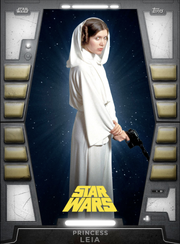 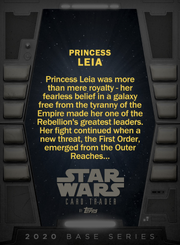 Retrieved from "https://starwarscardtrader.fandom.com/wiki/Princess_Leia_-_2020_Base_Series?oldid=34697"
Community content is available under CC-BY-SA unless otherwise noted.