After a full scale Imperial attack is ordered on the secret Rebel base on Hoth, Princess Leia fears for the Alliance. She helps coordinate the evacuation as snowspeeders and Imperial walkers battle outside, nearly caving the base in over her head. At the last moment, on her way to the remaining transports, she is forced to escape in the Millennium Falcon along with C-3PO, Han Solo and Chewbacca. With Imperial Star Destroyers closing in, Han steers his ship into an asteroid field, narrowly avoiding escape. 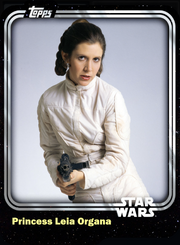 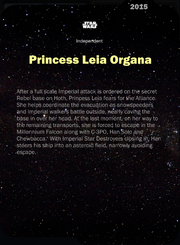 Retrieved from "https://starwarscardtrader.fandom.com/wiki/Princess_Leia_Organa_-_Rebel_Leader_(ESB)_-_Base_Series_1?oldid=38942"
Community content is available under CC-BY-SA unless otherwise noted.