While posing as an Imperial shuttle carrying parts and technical crew for the forest moon of Endor, Princess Leia Organa, along with a crew led by General Han Solo, plan to disable the shield generator protecting the second Death Star. After becoming separated from her group, she befriends a native Ewok, who takes her back to his village, evading Imperial forces. During the strike on the Imperial bunker, Leia is wounded but manages to take out two Stormtroopers in the process. 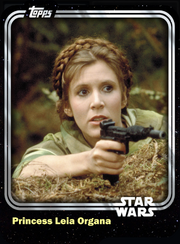 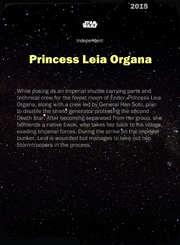 Retrieved from "https://starwarscardtrader.fandom.com/wiki/Princess_Leia_Organa_-_Rebel_Leader_(ROTJ)_-_Base_Series_1?oldid=36064"
Community content is available under CC-BY-SA unless otherwise noted.