Jedi Master Qui-Gon Jinn often disagreed with the Jedi High Council. He is deeply attuned to the Living Force, frequently going out of his way to help the weak and downtrodden. Originally Count Dooku's Padawan, Qui-Gon becomes the mentor to Obi-Wan Kenobi and, briefly, Anakin Skywalker, whom he believes to be the Chosen One of Jedi prophecy. Jinn meets a violent end in a furious clash with Darth Maul during the Battle of Naboo though he becomes the first Jedi to retain his life essence after dying. From the afterlife, he would go on to teach this technique to Yoda and Obi-Wan. 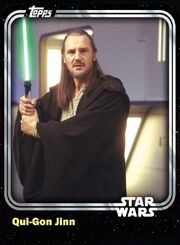 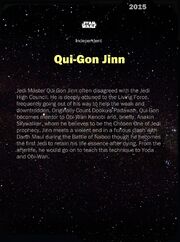 Retrieved from "https://starwarscardtrader.fandom.com/wiki/Qui-Gon_Jinn_-_Jedi_Master_-_Base_Series_1?oldid=40421"
Community content is available under CC-BY-SA unless otherwise noted.