An R2-series Astromech Droid, Artoo-Detoo (R2-D2) has developed an adventuresome personality after years of finding himself at the centre of significant galactic events. He is instrumental in aiding Queen-turned-Senator Padmé Amidala, as she fights for the liberation of her home planet Naboo, then later as she accompanies Anakin Skywalker to both Tatooine and Geonosis. In addition to projecting holograms and preparing starships, R2-D2 has the ability to fly via a pair of jets mounted at his sides. 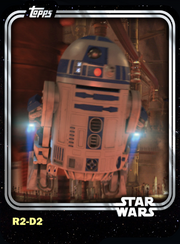 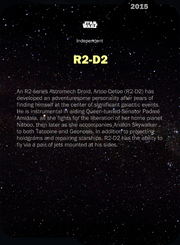 Retrieved from "https://starwarscardtrader.fandom.com/wiki/R2-D2_-_Astromech_Droid_(AOTC)_-_Base_Series_1?oldid=34554"
Community content is available under CC-BY-SA unless otherwise noted.