An Astromech Droid who plays a key role in the history of galactic turmoil, R2-D2 is severely damaged during the Death Star raid, but is promptly repaired in time for the Rebels' well-earned celebration. Soon after he accompanies Luke Skywalker to ice planet Hoth, aiding the ongoing struggle against Imperial forces, and eventually the swamp world of Dagobah. As young Skywalker learns the ways of the Force from Jedi Master Yoda, R2-D2 helps to prepare Luke's bog-battered starfighter for departure. 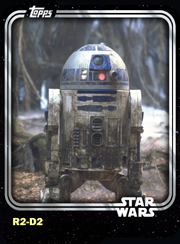 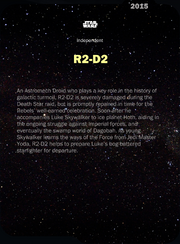 Retrieved from "https://starwarscardtrader.fandom.com/wiki/R2-D2_-_Astromech_Droid_(ESB)_-_Base_Series_1?oldid=32196"
Community content is available under CC-BY-SA unless otherwise noted.