An Astromech Droid with a great deal of battlefield experience, R2-D2 (Artoo-Detoo) serves the Alliance in 3 ABY, along with Protocol Droid counterpart C-3PO. Both are involved in a plan to rescue Han Solo from Jabba the Hutt's clutches on Tatooine; this effort leads to a spectacular battle aboard Jabba's sail barge. When a plan is launched to destroy the Galactic Empire's second Death Star, R2-D2 and C-3PO are sent to the forested moon of Endor with their Rebel masters to deactivate the Empire's force shield. 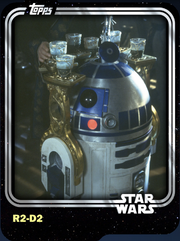 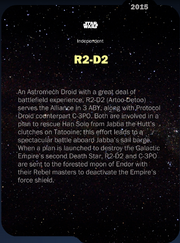 Retrieved from "https://starwarscardtrader.fandom.com/wiki/R2-D2_-_Jabba%27s_Sail_Barge_-_Base_Series_1?oldid=32202"
Community content is available under CC-BY-SA unless otherwise noted.