Also known as Red, R5-D4 is one of the last Droids produced in the low-cost Industrial Automaton R5 line, a line plagued with malfunctions. R5-D4 does not escape this fate, and grows frustrated over time because of it. Eventually sold to Jawas on planet Tatooine, the Droid is about to be sold to Owen Lars and Luke Skywalker when it is sabotaged by R2-D2, who is acting under pre-programmed orders from Princess Leia to locate Obi-Wan Kenobi at all costs, even if it means disabling a fellow Droid. 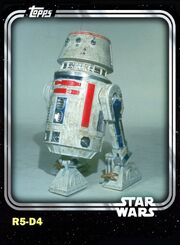 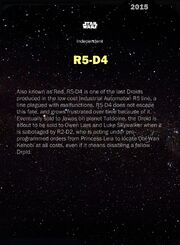 Retrieved from "https://starwarscardtrader.fandom.com/wiki/R5-D4_-_Astromech_Droid_-_Base_Series_1?oldid=40584"
Community content is available under CC-BY-SA unless otherwise noted.