Coming from all walks of life, the Rebels troopers are the standard soldiers of the Rebel Alliance. Although unable to finance an established uniform for an entire army, the Alliance devise a standard look in order for troopers to identify themselves and to improve morale and unit solidarity. They initially start out as loosely connected resistance groups, but under the command of Mon Mothma, the Rebel Troops soon became an impressively armed and trained galaxy-spanning infantry. 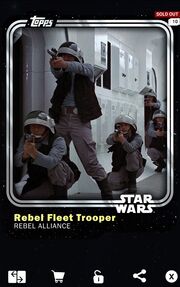 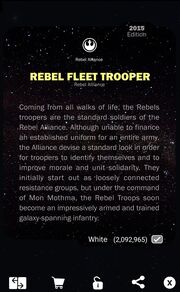 Retrieved from "https://starwarscardtrader.fandom.com/wiki/Rebel_Fleet_Trooper_-_Rebel_Alliance_-_Base_Series_1?oldid=36067"
Community content is available under CC-BY-SA unless otherwise noted.