Neimoidian Rune Haako serves as Settlement Officer of the Trade Federation and is lieutenant to Viceroy Nute Gunray. Protesting the Galactic Senate's new taxation of trade routes, he brings about the Federation's blockade of planet Naboo and is key in the resulting invasion of this planet. Naboo's monarch, Queen Amidala, allies herself with Jedi warriors and is able to break this occupation, a military and political triumph that leads to the prompt arrest of both Haako and Gunray. 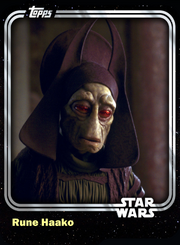 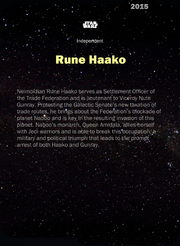 Retrieved from "https://starwarscardtrader.fandom.com/wiki/Rune_Haako_-_Settlement_Officer_-_Base_Series_1?oldid=31750"
Community content is available under CC-BY-SA unless otherwise noted.