The Muun Chairman of the InterGalactic Banking Clan, San Hill pledges the Clan's considerable financial and military assets to the Confederacy of Independent Systems during the Clone Wars. Like most members of his species, he's far more comfortable with business and closed-door politics than adventures on the battlefield. A highly influential figure, Hill conspires with Poggle the Lesser and Count Dooku to destroy their volatile ally General Grievous; they then rebuilt him as a super-cyborg of servitude. 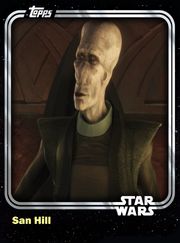 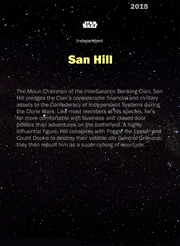 Retrieved from "https://starwarscardtrader.fandom.com/wiki/San_Hill_-_Banking_Clan_Chairman_-_Base_Series_1?oldid=35915"
Community content is available under CC-BY-SA unless otherwise noted.