Sarlaccs begin their lives as spores and are able to travel great distances. When a male and female encounter one another, the smaller male will parasitically feed off the female, diminishing her size while increasing his own. Once he has reached the female's original size, he will burst, releasing millions of spores into the air and atmosphere. They reach maturity after 30,000 years. Only then will they burrow nearly one hundred meters underground to feed on creatures unfortunate to fall into their mouths. Once inside, the victims will be injected with neurotoxins that keep them immobile, yet in constant pain and fully conscious, as they are digested for millennia. 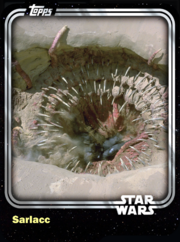 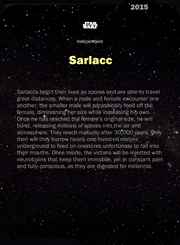 Retrieved from "https://starwarscardtrader.fandom.com/wiki/Sarlacc_-_Creature_-_Base_Series_1?oldid=34602"
Community content is available under CC-BY-SA unless otherwise noted.